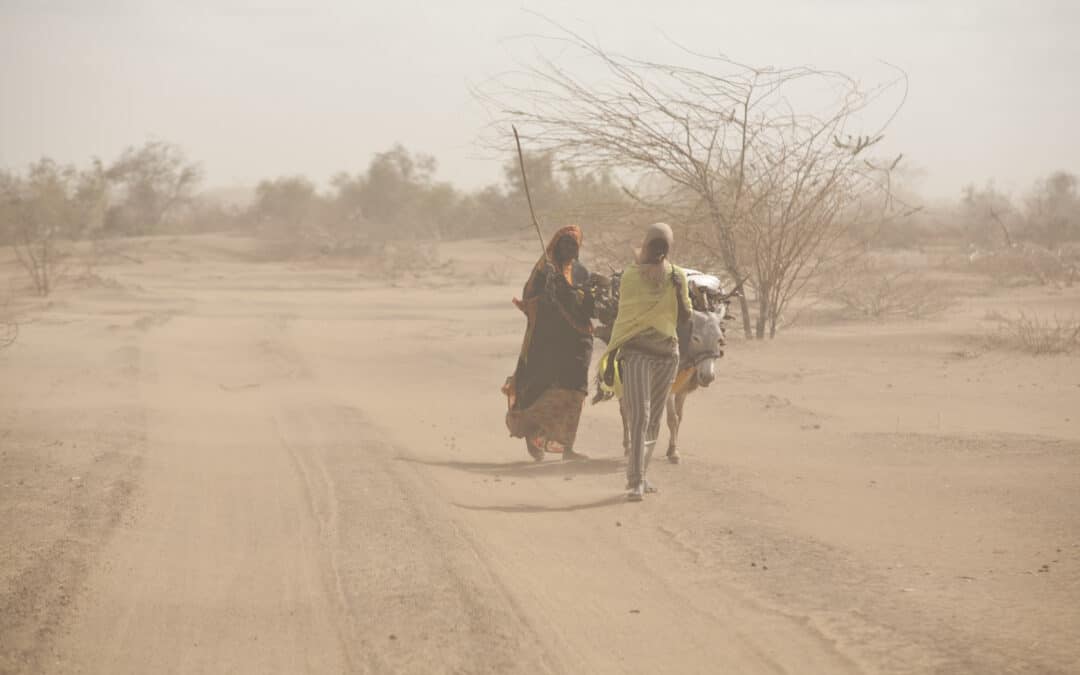 Following drought disasters in 2011 and 2016-2019, the countries of Somalia, Kenya and Ethiopia in the Horn of Africa are once again in a precarious situation. The dire effects of the current drought on the region’s people and animals are compounded by additional factors, including the desert locust plague, the COVID-19 pandemic with its health and economic impacts, unusually high food prices, and conflict. According to the Food and Agriculture Organization of the United Nations (FAO), the region is on the brink of a humanitarian catastrophe. VSF-Suisse is active in all three countries and has intensified its activities in view of the current crisis.

In the last three rainy seasons (Oct-Dec 2020, Apr-Jun 2021 and Oct-Dec 2021), much of the arid and semi-arid lands in Kenya, southern and central Somalia and southern Ethiopia received less than 70 percent of the average rainfall. Some areas even experienced the driest rainy seasons in history. Many livestock watering holes and waterholes have nearly dried up. For nomadic communities and their livestock, in addition to the lack of drinking water, the water shortage is causing massive degradation of pastures. Many animals are in such poor condition that milk production is down and livestock prices have dropped, negatively impacting people’s livelihoods. In many places, there have even been livestock deaths. According to the FAO, in Kenya, for example, 1.4 million animals died in just three months, from October to December 2021.

In agricultural areas, the late start of the current rainy season and below-average rainfall overall have led to very poor harvests or even crop failures. As a result, people have hardly been able to build up stocks and thus remain dependent on the market and its rising prices for an extended period. 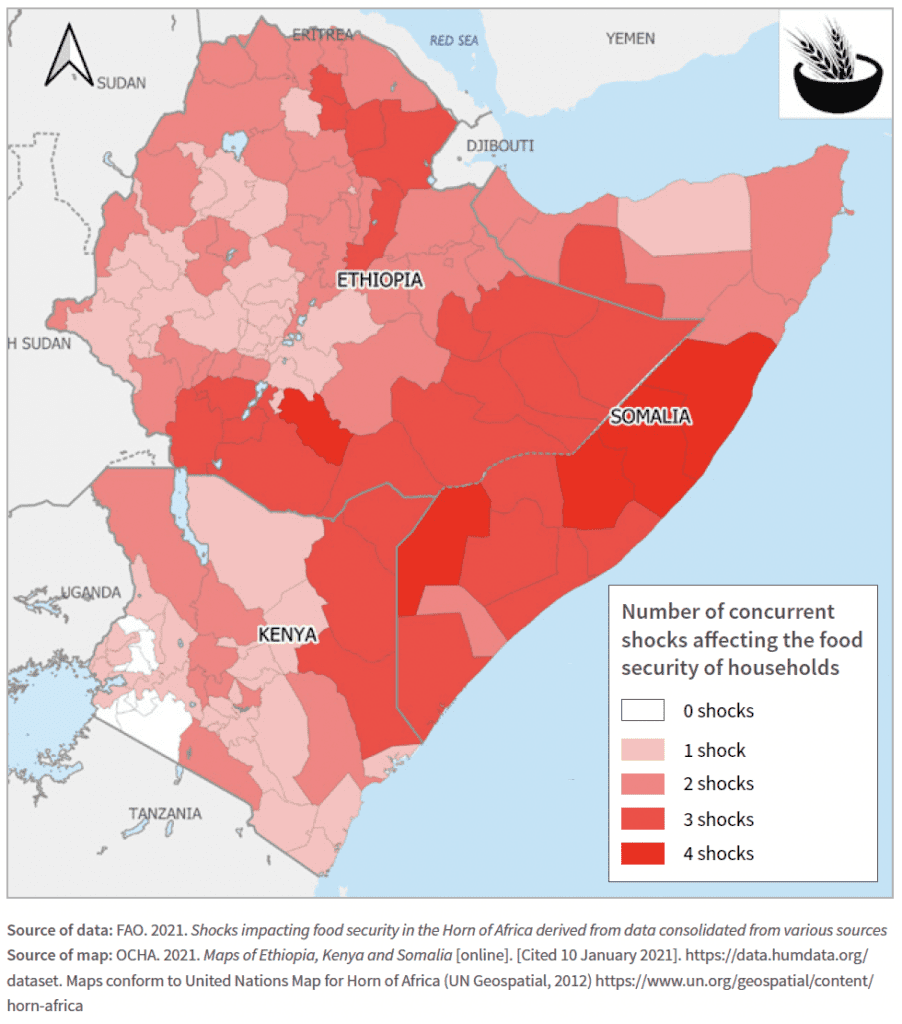 Some areas have to deal with 4 shocks at the same time: drought, conflict, locusts, high food prices. © FAO

Access to food has been further hampered by rising food prices in drought-affected areas in all three countries. In Ethiopia, food prices have risen sharply due in part to the conflict in Tigray.

In Somalia, below-average harvests in recent droughts have led to a significant increase in cereal prices. In the most affected areas of the country, cereals now cost even more than they did during the 2011 famine and 2017 drought. Some staple foods are not available at all, and the important flow of goods from Ethiopia to Somalia has been affected due to the aforementioned conflict.

In Kenya, food price increases are less extreme thanks to good harvests in the western parts of the country. Nevertheless, grain prices in the drought-affected areas in the north and east of the country are at above-average levels.

Impact of the desert locust plague

Although the situation has improved significantly compared to the same time in 2020 due to successful control measures and less favorable weather conditions for desert locusts, the impact of this pest on food security has been significant across the region over the past two years, according to numerous analyses by the Platform for Food Insecurity Classification (IPC).

Insecurity due to conflict

Conflict is partly responsible for food insecurity in the Horn of Africa, as it destroys livelihoods, cripples markets and leads to massive displacement, particularly in Ethiopia and Somalia. In addition, significant restrictions on humanitarian assistance remain in both countries. But the situation is also worsening in parts of Kenya due to an increase in drought-related and resource conflicts. 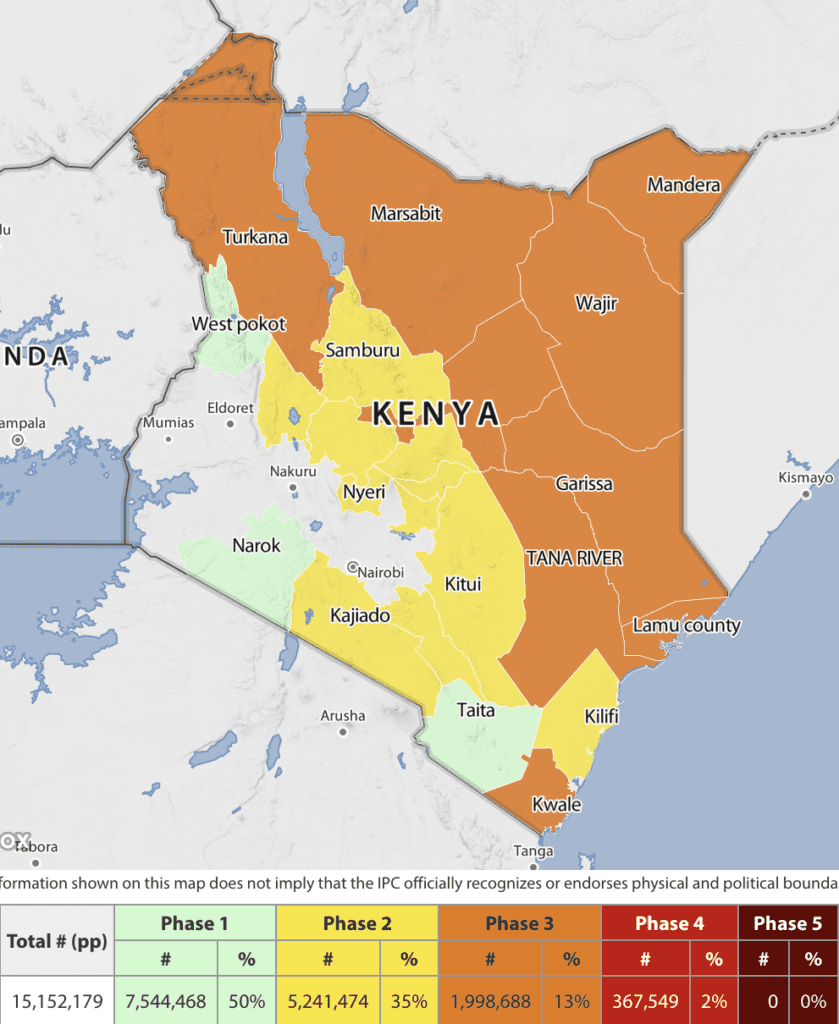 In Somalia, 4.6 million people are projected to be acutely food insecure (IPC Phase 3 or higher) between February and May 2022, double the number from the same period in 2021.

According to the mid-year report of the United Nations Humanitarian Response Plan for Ethiopia, nearly 18 million people in Ethiopia are in need of food assistance.

Malnutrition rates are also high in all three countries, with the prevalence of global acute malnutrition above the 15 percent threshold in many areas. Among pastoralist communities, research has shown a clear link between the availability of milk and the nutritional status of children under five. Given the significant decline in milk production due to poor animal health, malnutrition rates in pastoralist areas are likely to continue to rise during the upcoming dry season.

VSF-Suisse is active in all three countries and has intensified its activities in light of the current crisis. As part of an FAO-funded project in Kenya, we are supporting 2,000 people and their families with cash and feed for their animals in Mandera and Wajir counties, among others.

The combined distribution of cash and animal feed has proven successful. It respects the choices and dignity of the affected people while promoting their economic recovery and ensuring basic animal care. In addition, we have provided training on animal husbandry and feeding. The health of the properly fed camels, cows, sheep and goats improved noticeably in the first 10 days and milk production doubled. 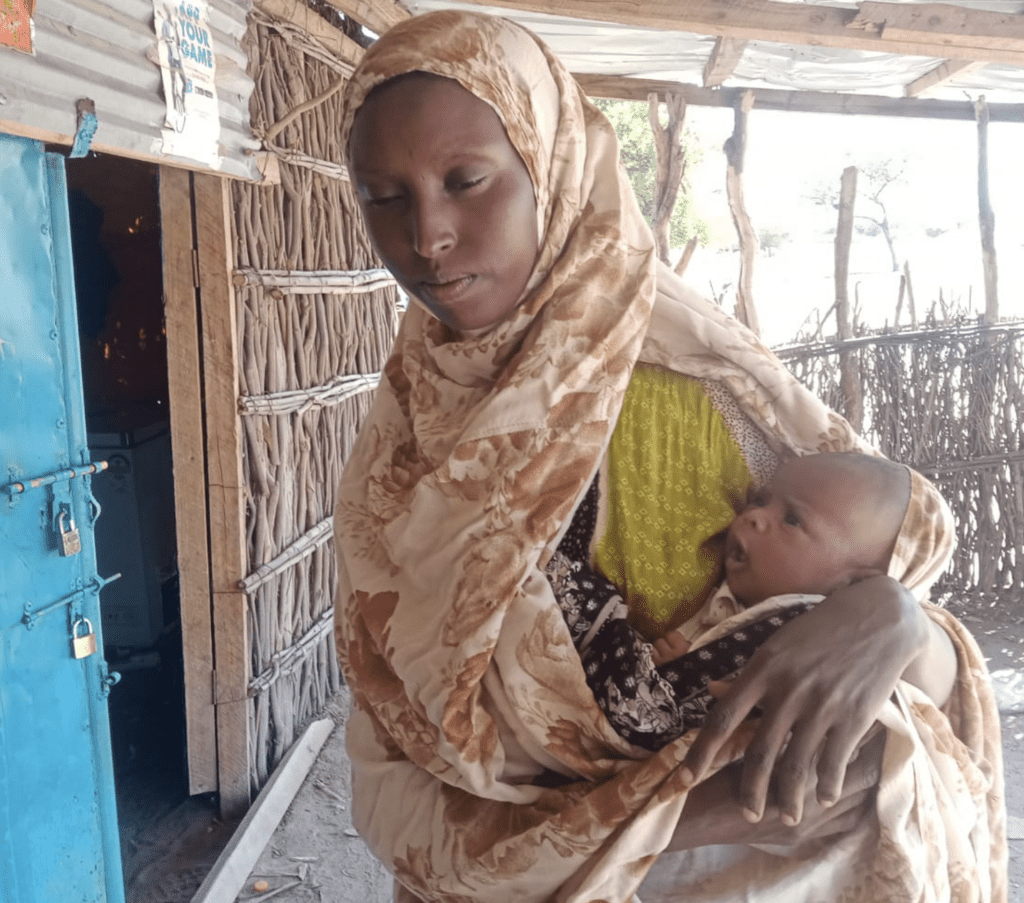 “The drought weakened my animals so much that they stopped giving milk. But my children depend on milk. With the financial support, I was able to buy food and powdered milk for my children. Thanks to the animal feed we received, my animals produced enough milk to feed my children again after 2-3 weeks.”

As you can see, our support reaches the people who really need it. Unfortunately, our staff on the ground also report that the help is not enough: thousands and thousands more communities like this one need immediate support. We continue to rely on donations to continue this life-saving work for the people and animals of the Horn of Africa. Please help, too!