The Horn of Africa is facing a crisis. The current nutritional situation is precarious and predictions for the remainder of 2021 are alarming – with warnings of famine for certain regions. The combined effects of a weak last rainy season and a delayed current rainy season, the accompanying current drought, the desert locust plague, as well as various conflicts in the region and the Covid-19 pandemic are responsible for the situation. Reports from our staff in Ethiopia, Kenya, Somalia, and South Sudan are worrisome, and the initiative for Integrated Food Security Phase Classification (IPC) warns of a catastrophe with more than 15 million people at risk. The international community is called upon to take immediate action.

The Horn of Africa has known periods of drought. In some years, however, the preceding rainy season is relatively productive, allowing enough water to be stored in wells, reservoirs and the soil to get through a normal dry season reasonably well. However, the last rainy season was weak and the current one came late. South Sudan is dealing with the opposite problem: Here, too much rain led to flooding, destroying the livelihoods of entire communities and forcing them to flee.

The issues in the Horn of Africa are complex, especially this year and last. Weather-related difficulties were compounded by an invasion of desert locusts that destroyed entire fields and ate away supplies, crops and animal feed. The impact of the global Covid-19 pandemic and various regional conflicts are further exacerbating the food situation. A lot of issues are coming together at the moment, resulting in water and food shortages that threaten the lives and livelihoods of more than 15 million people in Ethiopia, Kenya, Somalia and South Sudan, according to data provided by the initiative for Integrated Food Security Phase Classification (IPC).

The different classifications of food insecurity

The IPC is an international initiative, supported by the United Nations, leading non-governmental organizations and governmental actors, to improve analysis and decision-making in the field of food security and nutrition. The IPC classification allows the severity and extent of acute and chronic food insecurity and acute malnutrition in a country to be determined according to internationally accepted scientific standards. To assess the current situation in light of an impending famine, the IPC Acute Food Insecurity Classification (IPC AFI) is used. This scale provides strategically relevant information to prevent, mitigate or reduce severe food insecurity that threatens lives or livelihoods. It distinguishes between five different severity levels (IPC phases):

Different severity levels may prevail in different regions in a country at the same time. The following is an overview of the situation in our partner countries South Sudan, Ethiopia, Kenya and Somalia.

In South Sudan, food insecurity is currently at its most severe and has reached levels not seen in years. Projections predict 7.2 million people will be affected by acute food insecurity (IPC Phase 3 or higher) by July 2021. 100,000 people are expected to be in a state of famine (IPC Phase 5) in 2021. 1.8 million women and children are acutely malnourished, and the situation continues to deteriorate.

Unlike other countries in the Horn of Africa, where water is lacking due to a weak rainy season, in South Sudan flooding and the associated movement of people are partly responsible for the precarious food situation. Local insecurity, economic crisis and poor harvests are also contributing factors.

The United Nations and other international and local organizations are urgently calling for the financing and implementation of targeted emergency measures to avert widespread famine.

We are also mobilizing all available forces on the ground and providing emergency aid. VSF-Suisse is an active member of the Food Security Cluster (FSC), a global coordinating body for food security during a humanitarian crisis led by the Food and Agriculture Organization of the United Nations (FAO) and the World Food Programme (WFP). Our country director for South Sudan, Phanuel Adwera, explains:

“VSF-Suisse has been contracted by the Food Security Cluster to implement emergency food security interventions in 3 of the 10 counties classified as closest to famine (IPC 4 and 5) in South Sudan.”

The following interventions are currently underway:

– In collaboration with the International Organization for Migration (IOM) and FAO, VSF-Suisse has just completed an emergency fisheries intervention that successfully provided 9,000 households (approximately 54,000 people) with improved access to fish from the Nile River, its tributaries, and the vast swamps created by massive flooding. This immediately improved food security for the affected families.

– VSF-Suisse, in collaboration with the United Nations Office for the Coordination of Humanitarian Affairs (UNOCHA) and FAO, is currently providing 13,867 households (83,202 people) in Aweil South district with vegetable growing and fishing kits to supplement the families’ diets with nutritious food and reduce malnutrition.

– There has been an increase in livestock diseases due to massive flooding that has made it impossible to use grazing land and led to persistent wetness, creating a breeding ground for disease. In collaboration with FAO and with financial support from USAID’s Bureau for Humanitarian Assistance, VSF-Suisse has intensified vaccination and animal health campaigns in hard-to-reach areas. We are also training more animal health workers. A healthy livestock is an important prerequisite for increased food security.

Like the FSC and other UN organizations, VSF-Suisse points out the need for more financial resources and donations to tackle the precarious food situation in South Sudan.

Although humanitarian action has already been taken, an estimated 12.9 million people are expected to be affected by a high level of acute food insecurity (IPC Phase 3 or higher) by July 2021. The situation is expected to ease over the July-September 2021 projection period. However, even then, food insecurity is still considered critical or worse (IPC Phase 3 or higher) for about 4 million people in hard-to-reach areas.

The IPC sees the weak rainy season, economic problems and impeded access to food as a result of the Covid-19 measures, the damage to pastures and crops caused by the desert locusts, and the displacement of about 1.2 million people due to the conflict in Tigray as the main reasons for the situation in Ethiopia.

VSF-Suisse is active in the affected regions and is helping, among other things, to build capacity for water storage. In the dry season, water scarcity is always a problem. Animal health and productivity suffer from a lack of water. This endangers the food security and livelihoods of the people. With the long-awaited rains now slowly setting in, there is hope.

Kenya – the importance of livestock

In February 2021, the situation for an estimated 1.4 million people in Kenya was classified as critical (IPC Phase 3) or worse. This compares to 1.3 million people in the same period in 2020, marking an increase of 15%. The severe food insecurity in Kenya has also mainly been attributed to poor seasonal rains.

Currently, estimates suggest that the number of people suffering from critical food insecurity will still rise to about 1.8 million by the end of May. 239,000 people are even in an emergency situation (IPC phase 4). In addition, an estimated 541,700 children under the age of five and 98,800 pregnant or lactating women need treatment for acute malnutrition.

The main reason for the high level of acute malnutrition is largely due to reduced milk production, resulting from a lack of feed and water as well as poor animal health. Milk is the main food for children under five in the drylands.

This once again underlines how vital healthy animals are for the people in these regions. VSF-Suisse is committed to improving access to animal health services for livestock farmers in remote regions. 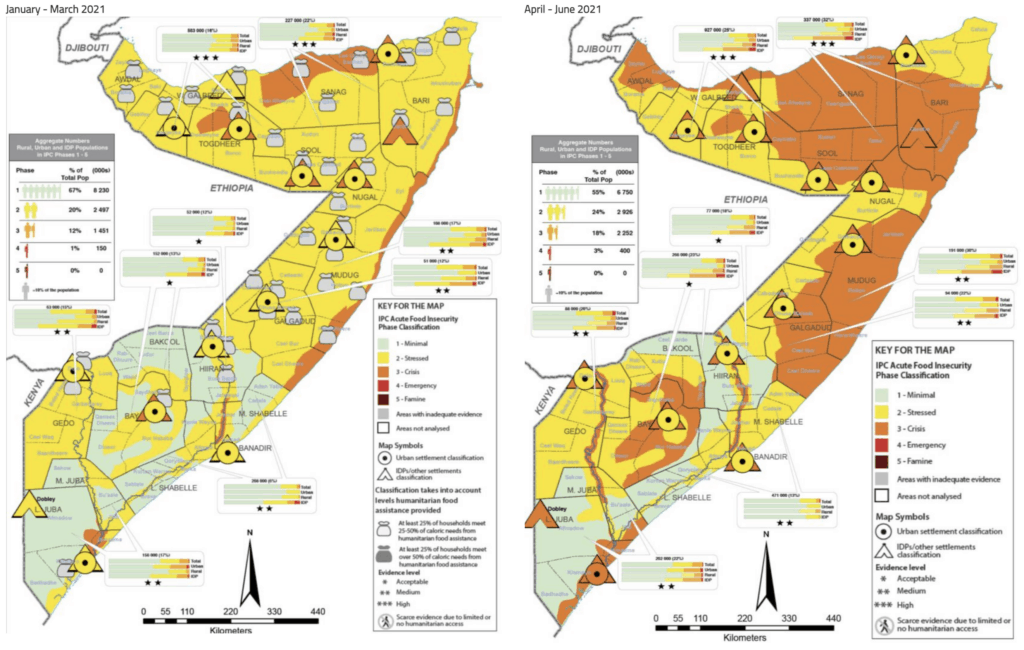 Up to 2.7 million people across Somalia will suffer from acute food insecurity (IPC Phase 3 or higher) by mid-2021 if humanitarian assistance is not provided. This already includes 400,000 people in emergency situations (IPC Phase 4). In addition, some 840,000 children under the age of five are acutely malnourished. The reasons for the severity of the drought and its dire effects are the same as in neighboring countries: Lack of rain, desert locusts, Covid-19, and conflict.

Fortunately, the ongoing large-scale humanitarian food assistance as well as government actions since July 2020 have mitigated the extent of food insecurity. However, meteorological forecasts indicate an increased likelihood of below-average rainfall for the April-June 2021 rainy season. Support for the people of Somalia must therefore not stop.

In addition to providing emergency relief, VSF-Suisse has been supporting the local population with long-term projects to improve drought resilience. This includes, for example, the rehabilitation of wells to increase their water storage capacity and thus supply people and animals for longer. People are trained in the maintenance of the wells and are brought together to form so-called water management committees so that they can look after the wells jointly and sustainably.