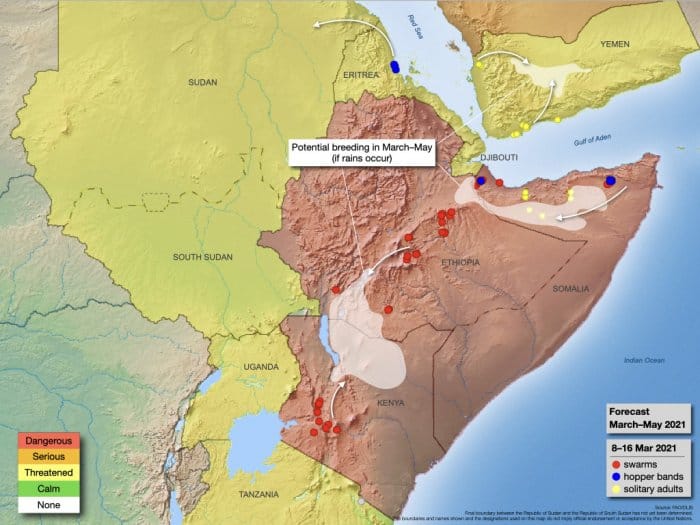 Desert locusts remain present across the greater Horn of Africa (HoA). Although current swarms are smaller and less numerous, the impact on affected communities remains high and may lead to increased vulnerability of pastoralist and agro-pastoralist communities throughout the greater HoA, affecting their livelihoods, food security and nutrition status.

The following is a joint statement by the Regional Desert Locust Alliance (RDLA)*, which VSF-Suisse is part of.

Following the extensive breeding that took place at the end of 2020, desert locusts remain present across the greater Horn of Africa. Additionally, recent rains in parts of Kenya and Ethiopia provide an opportunity for the current swarms to mature and lay eggs, which would lead to another generation of breeding. The Food and Agriculture Organisation of the United Nations (FAO) reports that the current situation differs from this time last year, in that current swarms are smaller, and less numerous. The impact on affected communities however remains high. In addition to multiple waves of desert locusts, communities also faced multiple crises in 2020, including insecurity, cyclones, floods and dry spells, as well as the social and economic consequences of the Covid-19 pandemic.

The food security outlook from January 2021 reports that an estimated 30.9 million people are now facing severe food insecurity (IPC 3 or worse) in a number of countries across the region, including Djibouti, Ethiopia, Kenya, Somalia, South Sudan and Uganda. Desert locusts are expected to impact both crop production and pasture for livestock grazing, which would then negatively impact the food security of millions of people across the region, particularly for vulnerable groups.

According to FAO’s impact assessment conducted between October and December 2020, roughly one third of cropping households and a half of livestock-rearing households experienced desert locust-related pasture and crop losses. Additionally, 7 out of 10 impacted respondents experienced high or very high losses to their crops and rangeland across Ethiopia, Kenya and Somalia. Affected respondents also expressed concern that desert locusts were driving increased food insecurity and malnutrition, emotional stress and anxiety, as well as issues relating to animal and human health in addition to the direct damage to crops and rangeland.

For many rural communities, pastoralism and agriculture is the primary source of food and livelihood. Between April 2020 and January 2021, the RDLA reached 424,888 households with food security and livelihood support, 58% of which was delivered through cash assistance. Elizabeth, from one of the many households affected by desert locust in Marsabit County in Kenya, explains, “investing in impacted women comes with results as you can see from my harvest. I truly appreciate Welthungerhilfe and PACIDA [eine lokale NGO] in choosing to work with women to make us productive to meet our children’s needs in such difficult times. My children and mum already feel the change, especially the improved feeding. They all enjoy cowpeas enriched porridge and chapati with beans stew. This makes me so happy as a mother.”

Without continuous support, the desert locust crisis – compounded by other shocks – will lead to increased vulnerability of pastoralist and agro-pastoralist communities throughout the greater Horn of Africa, affecting their livelihoods, food security and nutrition status. The RDLA calls on donors and governments to continue supporting crisis-affected communities across the region. Of particular importance is the continued provision of funding for front line responders, including local and national actors who have the ability to provide immediate food security and livelihood support, strengthen community-based surveillance systems and enhance community awareness for desert locust control and surveillance operations.

*The Regional Desert Locust Alliance brings together National and International NGOs who are responding to the desert locust crisis in the greater Horn of Africa. The Alliance was formed in February 2020 in response to the increased locust threat to food security and livelihoods in nine countries in the greater Horn of Africa – Djibouti, Eritrea, Ethiopia, Kenya, Somalia, South Sudan, the Sudan, Uganda and the United Republic of Tanzania.